The 6 versions of Magna Carta 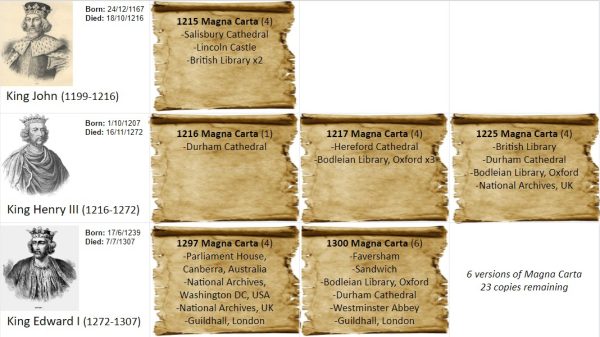 Magna Carta is arguably the most famous medieval document.  It sets out basic rights and liberties which are now considered fundamental in a just society.  However, there is not only one version of Magna Carta, but 6 in total, issued by 3 different kings.

First granted at Runnymede by King John in 1215 as a concession to his rebellious barons (it promised the protection of church rights, protection for the barons from illegal imprisonment, access to swift justice, and limitations on feudal payments to the crown).  Magna Carta is the prime example of the contractual nature of government, meaning that a ruler can only govern with the assent of his or her subjects.

Upon King John’s death in October 1216, his 9 year old son became King Henry III.  Henry’s government decided to resurrect the 1215 Magna Carta (Some of the clauses were removed, including those unfavourable to the Papacy and clause 61, which had set up the council of barons).  The rebel barons were encouraged to come back to the King’s cause in exchange for the return of their lands.  The move was not successful and opposition to Henry’s new government hardened.

A great council was called in October and November to take stock of the post-war situation; this council is thought to have formulated and issued the Charter of 1217.  Henry’s government reissued the 1216 Magna Carta (Some additional clauses were added to protect the rights of the barons over their feudal subjects, and the restrictions on the crown’s ability to levy taxation were watered down).

In exchange for agreeing to support Henry, the barons demanded that the King reissue Magna Carta.  (Almost identical to the 1217 version, but the King declared that it was issued of his “own spontaneous and free will” and confirmed it with the royal seal, giving it much more authority than the previous versions).

Edward I reissued the 1225 Magna Carta, in return for a new tax.  It is this version which remains in statute today, although with most articles now repealed.

Last confirmation of the 1225 Magna Carta drawn up by the Royal Chancery,  and distributed under the King’s seal, to the counties and cathedrals of the country.  (It represented the compromise that Crown and Barons could tolerate.  It confirms to the Cinque Ports all their liberties and free customs.  It became the recognised standard thereafter.)

Why does Faversham have a Magna Carta?

The 1300 Magna Carta confirms the ancient rights of the Cinque Ports and the liberties of the English towns and so is an important symbol of civic independence.  As a branch of the Cinque Ports (Limb of Dover), Faversham received this document “For the Barons of the Port of Faversham”.

With only 23 surviving copies of Magna Carta, Faversham is proud to have ours on permanent display within our accessible exhibition, with free entrance to all visitors.