Just before Faversham’s astonishing medieval horn went on display in the Magna Carta exhibition, we caught up with Dr Louise Bacon who has studied it in detail and asked her a few questions. 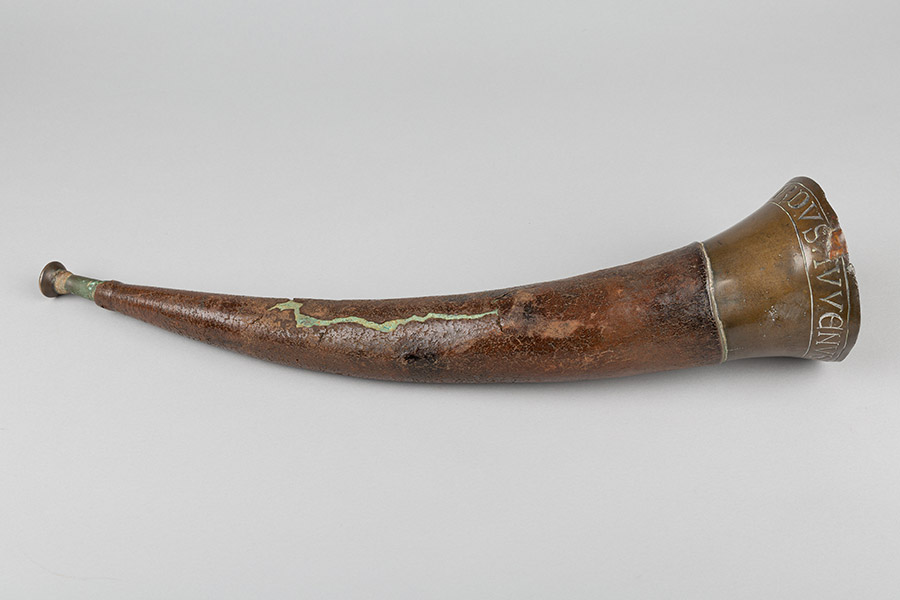 How did you first hear about Faversham’s common horn?

In my profession as a Museum conservator I’ve always preferred metal objects and metallurgy and have worked on the metallurgy of early ‘brass’ wind instruments for a PhD project. I was looking at instruments dating from 1651 to 1867 but the much earlier ‘Burghmote horns’ ― like Faversham’s ― were listed by Frederick Crane in a book: Extant Medieval Musical Instruments. (Iowa, 1972). I was intrigued but had to wait until my retirement to pursue this line of enquiry.

It’s a very impressive object – can you give us some vital statistics?

It’s ‘sounding length’ is 682mm (including the mouthpiece and mouthpiece receiver) and the diameter of the bell is 150mm. I’ve never weighed it. But it’s heavy.

The question on everyone’s lips (literally): Does it still work?

Well, on the 11 July 2019 it was blown by Kent musical instrument specialist and restorer, Chris McNeilly. He got two good notes, with a third achievable (A-A-E). I gather incoming Faversham town councillors have been encouraged to try it in the past.

Do we know how old it is?

It is very difficult to date these horns precisely. Dates given for them are usually taken from the earliest mention in existing historical records of a particular horn being blown. The earliest mention for Faversham’s horn is in record of 1258 copied up in the town’s custumal. Whether or not this refers to the horn we have today we can’t be sure, but it is usually thought to date from at least the year 1300, so it’s possible.

Are there any records of how it was used?

Records from the town custumal and other Faversham records show it being used to summon the community to meetings of the ‘Burghmote’ but it was probably used at other times too. A later record, for example, shows a horn blower was paid extra for blowing it at the death of a child in the 1630s. My current work is spending time in the Kent Record office in Maidstone continuing to look for records to supplement those found by the ‘REED’ project (Records of Early English Drama) about early appearances of musical instruments and performance in English records. I shall be looking through the Faversham Chamberlains Accounts to check there are no records for a new horn since 1640 and to see if there are records for putting the leather cover round the horn. I’d also really like to find out to find out some of names of the horn blowers (The REED project did not come up with any early names). 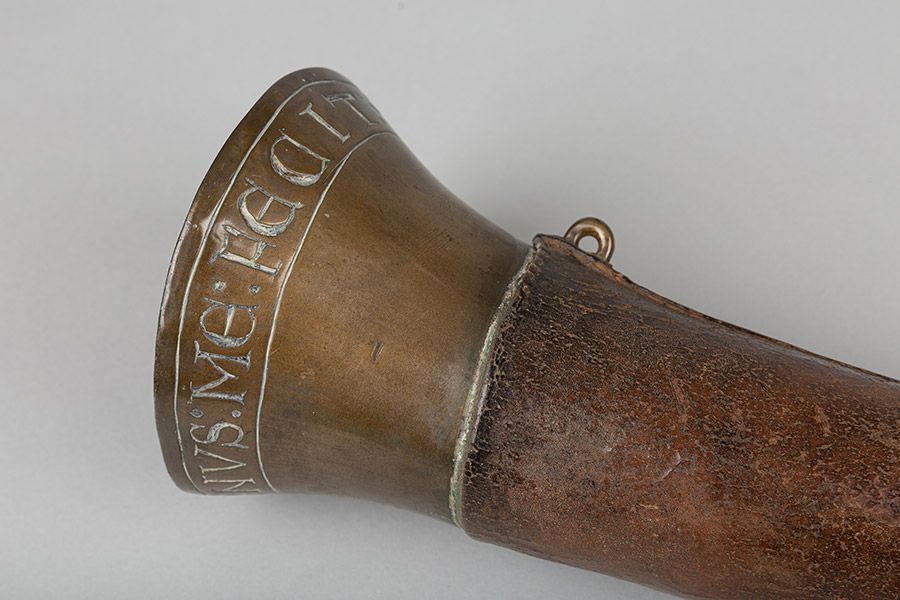 What is the text around the bell?

‘RICARDUS JUVENUS ME FECIT’ or Richard the younger made me. Unfortunately, there’s not enough to go on to trace who Ricardus was.

We’ve seen your X-ray photos of the horn. How did you get to look at it radiographically and what did it reveal?

We took the horn to an industrial unit in Sittingbourne which has an X-ray unit. As a conservator I’ve been interested in how early instruments can be examined without physically dismantling them. We were mainly wanting to look at the damage the leather cover was hiding, which it did, in the form of a long solder patch. At some time, it seems the horn suffered a severe trauma to the back bow needing major repair. In fact, the records show that the horn was repaired at least four times.

But the X-rays also revealed some running scroll decoration below the inscription since hidden by the leather – a nice surprise!

There are actually seven Burghmote horns surviving in the care of town halls of the Cinque Ports towns: New Romney, Dover, Faversham, Folkestone, Sandwich, Hythe, and Winchelsea. Some may look very similar, but all are unique. The Faversham horn is perhaps the most interesting because of the inscription around the bell and the decoration of running foliage.

More information and more images of the Burghmote horn are here

With our thanks to Louise Bacon louise.bacon@btopenworld.com